Matcha has been gaining lots of popularity worldwide, but many people still haven’t heard of hojicha.
It is time we change that!: hojicha is delicious, low caffeine, and a proven well-being booster thanks to its aroma.
In this post you’ll learn how to DIY roast hojicha; you’ll be amazed at the depth of taste you can achieve with a couple of tricks.

What’s hojicha and reasons to drink it

Hojicha is a Japanese tea made from roasting green tea.
This roasting process removes the bitterness of the tea and provides an earthy, nutty flavor with natural sweetness.
Hojicha comes also with a soothing smoky aroma.

You’ll love this roasted tea because…

Of course, you can buy already done hojicha, but the cool thing is, you can also make your own by roasting regular green at home.

Traditionally, hojicha is roasted in a tea roaster called houroku, but you can also use a common pan.
In this article you’ll learn how to roast green tea in a pan.

Some common questions about hojicha

How much caffeine is in hojicha?

How do you pronounce hojicha?

Hōjicha (焙じ茶 or ほうじ茶) is pronounced with a long “o” (hōjicha).
You can also spell it houjicha.
Hōji- comes from roasting in Japanese and -cha means tea.
That means, you don’t have to say “Hojicha tea”; the word hojicha already includes the tea part.

Which green tea is best to roast for hojicha?

Hojicha is often made with the Japanese green tea sorts of bancha or lower grade sencha, but any kind of green tea will do it; there is no need for a special type.
It’s also okay to choose any old or expired green tea you have at home.
The best practice is to roast loose leaves but I’ve even tried with tea from teabags and in my opinion, you can get quite decent results too.
Bellow you’ll find some tricks to make hojicha from teabags.

Depending on how strong it’s roasted, hojicha can have a golden roast or darker reddish-brown color.
Some people prefer it lighter, while others like it dark and bolder.
Both are good and it only depends on about personal preference. My mom is a Japanese teacher and every time she shares this recipe with her students, the most frequent question we get is: does this work with green tea from a teabag?

You may already know that tea experts prefer loose leaf tea over teabags: the larger the tea leaf, the more flavorful the tea, and tea from an average teabag is usually much smaller than loose tea.
In the picture below you can see an example of how different loose tea leaves and tea from a tea bag can be.
Both are from the exact same organic brand (to be specific, they are from the private lavel of DM, a popular chain store in the country I live, Germany):

But who doesn’t have some teabags at home?
I find them very convenient, but because I use them less frequently, they are often expired…That’s why I thought “wouldn’t it be great to repurpose these into hojicha?”.

And to my delight, it worked!

Roasting green tea from a bag is quite similar to roasting tea leaves, with only some minimal differences:

To make hojicha with tea bags

How do you brew hojicha?

Once you have your green tea roasted, brewing a cup o a teapot of hojicha is very easy.
No matter if you use homemade hojicha or purchased an already roasted one, hojicha just need to steep in hot water for 30 seconds.
You can also cold steep them. Steeping them in room temperature or cold water will take between 30 minutes and 2 hours.

How to make hojicha

What goes well with hojicha?

Hojicha is very versatile: it pairs well with sweets, but also complements savory flavors.
It tastes good both as hot tea, as iced tea (also cold brewed) and you can drink this flavorful drink plain or adding some milk to create a delicious hojicha latte.

There are also many recipes that use this delicious tea in their cooking process such as hojicha chiffon cake, hojicha ice cream, hojicha cookies, hojicha cupcakes… even ramen noodles with hojicha!

And now to the fun part: let’s get roasting!

Roasting your own hojicha it’s highly rewarding because not only the resulting tea is very fragrant (even if you are repurposing stale tea leaves), but your kitchen will also smell awesome.

Basically, roasting green tea is as simple as roasting them in a clean and dry pan with high heat: toss them continuously so they get an even roast and in 2-5 minutes you will have delicious hojicha tea.

… there are a couple of tricks that will make your hojicha even more aromatic.
This way of roasting tea is known as the Gatten-method in Japan because it was featured in the show “Tameshite gatten”, a very popular lifestyle programm in Japanese National television (NHK).

This is how to roast hojicha using the ‘Gatten-method’:

How to roast green tea (hojicha)

Summary: is it worth roasting your own hojicha?

In my opinion, the answer is a huge “YES!”.
Of course, there are amazing hojichas to buy out there (I myself buy some), but roasting tea at home also has lots of perks:

And if these reasons weren’t enough, it is also very easy to make.

I hope you enjoy drinking this homemade hojicha as well as the relaxing, roasted aroma that spread in your kitchen when making it! (which is one of my favorite parts about roasting hōjicha). 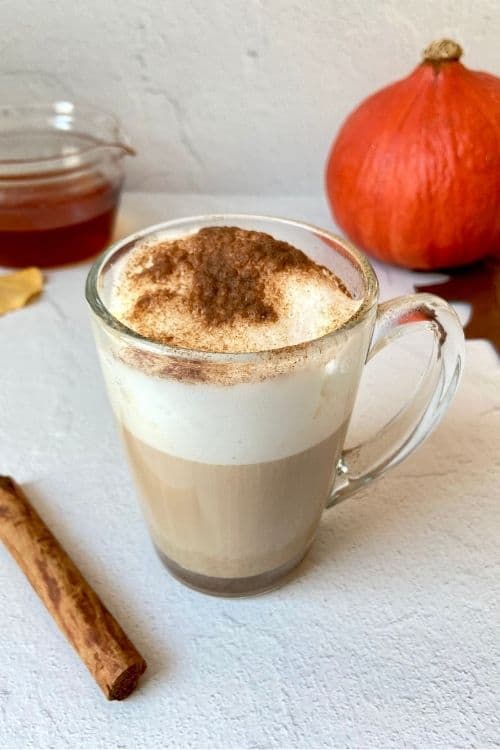 How to make 5 minute pumpkin chai latte at home An all natural cinnamon and lemon infused milk drink.